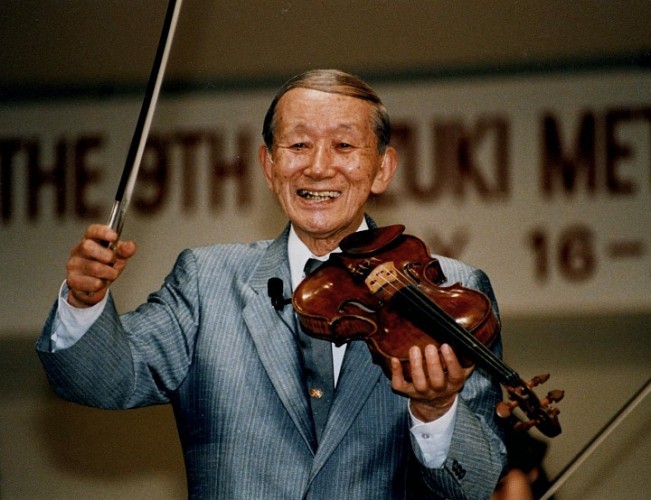 … I was prepared to not make a comment on this at all, but recent discussions about violin pedagogy and which method books to buy have reached a level of passion and vitriol I usually associate only with religion and politics (and that usually sends me looking for the door.)

For those of you too busy living life to get involved with controversies happening in internet-land, some people in the violin teaching world are currently embroiled in controversy because Mark O’Connor, a musician for whom I have always had a great deal of respect, out of passion for his own method, has written several deeply barbed critiques of the Suzuki method, which is one of the most widely used ways of teaching violin. To the best of my knowledge he has not questioned the method’s founder, Shin’ichi Suzuki’s birth certificate, but, in a manner rather like political discourse in the U.S., things have gotten a little out hand. I will not address all the concerns or critiques of either method or its founders explicitly, but I would like to plead for all of us on every side to take it down a notch.

I’m particularly disturbed by some of O’Connor’s criticisms of Japanese culture, Zen Buddhism, and “the samurai ethic” in Shin’ichi’s Suzuki’s background, as part of the reason we now need an “American violin method.” On forums, some passionate Suzuki enthusiasts have gotten into the mud right with him, making deeply offensive remarks about old-time music and jazz rooted in the worst kind of classical snobbery. This has to stop. If music education does any good for our students at all, it should be to help him or her appreciate the abundant creativity and diversity of ALL members of the human family. The same tools of rhythm and melody have been adapted and transformed by the world’s cultures in many different ways, from gamelan to Indian ragas to West African drumming, and to people like Joshua Bell, Natalie MacMaster, Mark Wood, and Regina Carter. All of them can produce artisans of great skill and creativity, all of them worthy of our respect and attention, and all of them would be great fun to study.   Racism, ethnocentrism, classism, sexism, or any other hateful –ism has no place in the way we teach music.

Ok, rant over. I consider myself a fairly new teacher, still in the process of completing all my training and education, so I will not go into too much detail behind all the abstract pedagogical theory or historical details. Rather, I’d like to speak out of my own experience in both learning and teaching violin, and why it has led me to believe the world of violin teaching has room for more then one, or two, or thirty “methods.”

The way I learned violin was, in some ways really great, but I feel also had some shortcomings.

I started on the Suzuki method in the beginning. My parents of course picked my teacher for me, none of us really knowing what “Suzuki” meant, but I do remember being really impressed that the author of my violin book also made motorcycles. One of the revolutionary hallmarks of the Suzuki method is “the mother tongue method.” Suzuki emphasized the importance of immersion, and nearly continuous listening to music, learning and imitating in a way similar to how a young child learns language. One of my teacher’s first instructions was to buy the recording, and listen to these songs as much as I could possibly stand. My mom followed her instructions, and we played the heck out of that tape. While bathing, cooking, playing, or riding in the car, the “Book 1” songs were almost always in the background. In this way, I already “knew” the songs even before I attempted to play them. Issues such as pitch and rhythm were thus easier for my 6-year-old brain to grasp, since I already had a deep appreciation of what things were “supposed” to sound like, and I could do a lot of teaching myself, experimenting with how to make myself sound more like the recording.

I feel that my ear is far stronger then it would have been had I tried to learn violin any other way. As I learned improvisation and fiddle music, I discovered this strong ear was an invaluable asset, and I was able to integrate the two schools of violin playing in a way that felt very natural and holistic. Today, I can pretty much play along with almost any kind of background music, pretty much instantaneously. It’s my party trick. (Before I met the amazing woman who would become my wife, she had already heard about me from people who heard me playing along with Sarah Brightman’s “Time to Say Goodbye,” followed by Tupac Shakur’s “Only God Can Judge Me”) Needless to say, this skill is something that has come quite in handy playing with other people who don’t always have sheet music or chord charts available. I give a lot of credit to my first teacher, and the Suzuki method in general, for building such a strong ear-to-instrument connection within myself.

However, the integration piece was something I developed fairly late in my musical development, and largely independently. Even though we lived in Nashville, the “capital of country music,” I was told, both by my own instructor and by other teachers I met at Suzuki camps, that while fiddling might be ok just for fun, I should not try to play it until graduating from book 2, because otherwise it might “ruin” my technique. I mostly heeded their advice, not really taking lessons for fiddle and improvisation for several years, and only after several horrible experiences with a different classical teacher who was not a good fit for me. It was assumed that I needed a solid foundation of the “correct” classical style before I could go on to anything else.

My examination of some excellent books that I used to both learn and teach improvisation or non-classical violin styles (Julie Lyonn Liberman’s The Contemporary Violinist, Edgar Gabriel’s String Groove, Mark Wood’s Electrify your Strings, Edward Huws Jones’ collection of books on several different ethnicities’ fiddle styles, and Mel Bay’s Getting into (Fiddling, Blues, Jazz, etc.) Violin series) operate from this assumption, by not really being too helpful unless you can already play your instrument with proficiency. Even the first exercises or songs of these great books would be a huge challenge to the beginner. While of course I do not expect every music book ever written to be accessible to the absolute beginner, I think the assumption that everyone needs a “classical background” before playing any other style is one that needs to be questioned.

Research suggests that young children have a far easier time learning and picking up languages then even older children, and that therefore, raising a child to be bilingual from the beginning makes all language learning easier then trying to “study” another language after one has already been set in stone. Applying Suzuki’s reasoning that music can be learned in a way similar to language, we can and should be pushing beginners to be musically “multilingual” as soon as possible. To the best of my knowledge, O’Connor’s method is one of the first that emphasizes improvisation from the beginning, and for this reason, I think it is worthy of some serious consideration. Classical training need not be in conflict with “alternative” styles of playing various styles of folk and popular music from different parts of the world, but both can work together to create truly well rounded musicians, with both a “beautiful heart,” and the confidence to express their own individuality in fresh and exciting ways. Even if the method we are most comfortable with seems to be teaching students well, we would do well to pay attention to what we can learn and change from new ideas and methods.

But this need not be at the expense of the good things both Suzuki and other so-called “traditional” methods have to offer. Our goal as teachers should be to recognize that different people learn in different ways, so no one method is going to work for everyone. Neither old nor new methods should be in competition with each other, but we should be open-minded and “improvisational,” looking at different methods and books as potential tools in helping a particular student along what he or she really wants for a lifetime adventure of music making.

This site uses Akismet to reduce spam. Learn how your comment data is processed.