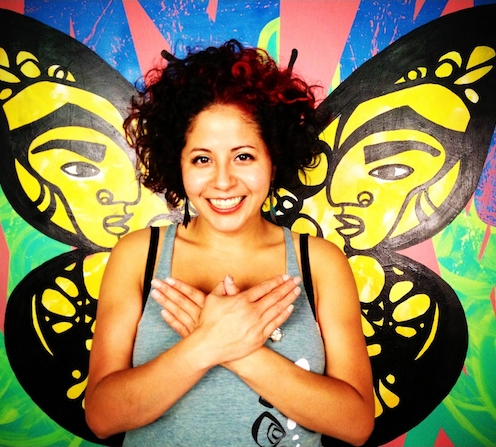 Recently, I was privileged to attend two lectures by two creative artists, deep thinkers, and people of color who have struggled to expand the white-centric art world’s definitions of who is worth listening to.

Favianna Rodriguez spoke at UCLA’s Visual and Performing Arts Program on February 6, 2019.  She grew up in Oakland as the daughter of Afro-Peruvian immigrants, and continues to be engaged with community life there, where she works with multiple disciplines to use art to “collaborate deeply with social movements to co-create art that’s resilient and transformative.”  She spoke with incredible eloquence and power about how art has the ability to change minds and uplift the story of people on the margins. Changing a nation’s laws is a long and difficult process, but art has the power to tell stories and create symbols that change people’s thinking. At a time when laws and rhetoric are fiercely hostile to immigrants, she uses the symbol of a butterfly (that freely migrants back and forth between ‘nations’ based on its needs) to show that “migration is beautiful.”

Thomas Wilkins spoke at Fuller Seminary on February 15, 2019.  One of the most highly regarded contemporary African-American conductors, he grew up in Norfolk, Virginia. When he was eight years old, he attended an orchestra performance at a school field trip, and that sparked a life-long love of classical music and orchestral conducting. He is now a well-esteemed conductor, traveling all over the United States to lead orchestras in concert.  He is a leader of the Omaha Symphony Orchestra, the Hollywood Bowl Orchestra, and the Boston Symphony Orchestra. He especially relishes the opportunity to put on “youth and family” concerts, where he gets to have fun talking to and passing his love of music on to future generations. This weekend, he was in town to lead the Los Angeles Philharmonic to honor the work of William Grant Still, a Harlem Renaissance composer of more than 150 works, including five symphonies.

This planet currently has more than 7.5 billion people living on it, and current research suggests that humans have occupied space on the earth for almost 200,000 years.  Within that breathtaking distance of time and place, almost every community that has ever existed has produced some form of music, dance, visual art, and stories.  And yet, given this breathtaking diversity, too often our orchestras, museums, and academies present a vision with very limited history and cultural context. Too often, the only art that is seen, heard, and studied is that produced in Europe or the United States, by relatively wealthy white males, roughly between 1700 and 1950. This narrow scope of a “canon” of “great masters” is incredibly limited, and leaves out many great creators whose work and stories don’t get told.

For Favianna Rodriguez, this reality of an ethnocentric “art world” is a serious problem she had to deal with personally. In her telling, she was introduced to the joy of creating art through community programs in Oakland, but “when I asked, ‘What are the great artists I should look up to and learn from?’ they mentioned Van Gogh, Gauguin, Picasso, and Andy Warhol. No one I felt like I had a lot in common with, as a Latina. Where were the people making art who had a story I could relate to?”  She reflected on the effect this had on her – that she had a harder time developing the confidence to put her vision out into the world “because I had no one in media that looked like me or told my story.”  In a world where she already had to deal with racism and marginalization, her passion for art became an act of resistance in itself – fighting to make society more receptive to the creative works of her and other female, queer, and non-white voices.

Maestro Thomas Wilkins had a slightly different relationship to the broader Classical music world. He acknowledged that he encountered stigma and both subtle and overt expressions of prejudice, but that he kept going in his path of music-making out of a deep love for what he heard.  For him, the European “great works” can powerfully speak to him, in spite of the very different cultural contexts in which the works were created.  Beethoven’s 5th Symphony (with its transition from minor to major) and the transcendent majesty of the “Jupiter” movement of Gustav Holst’s The Planets were two works he mentioned specifically that never fail to fill him with a sense of awe that causes him “get lost” and give him a sense of being close to God.  He felt a deep love and passion for the music and that is what drove him forward in his career, first and foremost always looking to be a “servant-artist,” putting both the music and the musicians as human beings first. He may have often experienced being the only black person in the room, but pressed on in exploring and creating music because “nobody told me I couldn’t.” I would theorize that if anyone did ever try to discourage him, he didn’t listen.

It might be tempting to put these two speakers on opposite sides of an ideological conflict or frame these two events as a “debate” over hot-button issues like representation, privilege, and multicultural engagement. One artist laments and rages against the institutions that uplifted wealthy white males to the exclusion of other peoples and stories. The other focused on the works those men created as things transcended their unjust social contexts, and still possess meaning and beauty worth dwelling on.  Regardless of where different creators may land on this debate, both lecturers seemed to agree that representation of minority voices in the arts is essential, and part of that means letting people’s awareness of what is “beautiful” and worthy of our attention get larger.

Rodriguez and Wilkins are both passionate educators. Since they were exposed to their passion through community programs, they both prioritize passing that passion on to future generations.  Traditionally, a “master artist” or orchestra leader is considered a person with a lot of authority. The view is that the person with expertise gives his (very rarely her) students with unchallenged instructions as if filling a bucket.

Both of these speakers viewed mentorship or leading in a radically different, non-hierarchical way. Wilkins sees his job as a conductor as a sort back-and-forth conversation, in which he trades off between using his control and relinquishing it to the orchestra’s players. “I consider it a trade… saying “here is your turn to lead, now it’s my turn to lead.”  In a piece written for orchestra, different instruments come to the foreground at different times. For example, the first movement of Still’s “Afro-American” Symphony No 1 in A-flat opens with a clarinet solo, that moves between one of two themes on muted trumpet, then flute, then oboe, and then cello.  For Wilkin’s this musical technique sharing of control and bringing different “voices” to the forefront at different times makes “the orchestra one of the most perfect metaphors for life in community.”

Rodriguez is very passionate about the intersection of art with activism and uplift of marginalized communities, and so is likewise passionate about bottom-up styles of education and leadership.  For her, one of the main purposes of art is to “disrupt invisibility,” which means giving a wide variety of different perspectives the ability to create their own vision and tell their own story.  She shared a panel with Alyssa Garcia of Las Fotos Project, an East L.A.-based group that teaches photography to teenage girls. Garcia pointed out that many arts educators start by teaching techniques and getting them up to a preconceived standard, and THEN (maybe) allowing the student to “be free” and create their own thing. But Las Fotos flips that around: “We start by teaching each girl to build her creative eye, and help her figure out what kind of story she wants to tell with the images she captures. Only after that do we teach about the technical aspects, as a way of refining her organic vision.”  The two agreed it was important to let kids have their own opinions and voice even as we are teaching and guiding them – so that they feel empowered from giving them permission to take up space.

Ultimately, my lesson from drawing these two lectures together is that we must, as teachers, performers, and listeners of music learn to appreciate and honor the human being behind the creation of “art”.  A work does not exist in a vacuum but is always a product of a human (or group) who struggled to create it, and their struggle cannot help but be informed by broader social forces that each creator chooses to either accept or struggle against.  Beethoven composed in a way radically different than his teacher Haydn because he was creating music at a time when Europe was undergoing great social and political upheaval – and needed new music to reflect its new reality.  Fairuz and Koko Taylor are both great singers, but they sound nothing alike because they were shaped by different contexts, each with their own ideas of what a ‘good’ voice sounded like.

I am white. I am also a person who loves all different kinds of music, and so has always been ready to embrace multiculturalism because it allows me to be exposed to and “inspired” by people and traditions different from what I would otherwise know. I have long believed that it is impossible to be both a creative musician and hold on to racial prejudice, because creativity demands that you keep an open mind to finding, celebrating, and learning from the beautiful wherever you can. Rejecting the art of particular culture deprives you of an opportunity to get new ideas that would help you grow as an artist.

However, lately,  I am coming to the conclusion that this is not good enough, or rather, has it exactly backward.  It is not hard to be consumers of someone else’s culture – especially if you are from a socially dominant or privileged group. But we have a responsibility to care about the people behind the creation of our music.  Our students, band-mates, colleagues, and the creators of works we love don’t have to earn their worth by what they produce. Rather, we want their true voice and beauty to come through because, first and foremost, they are people deserving of dignity and compassion.

This site uses Akismet to reduce spam. Learn how your comment data is processed.